Macs aren’t immune from hard disk corruption and failures. They’re just as common on Macs as they are PCs. Although most Macs have solid-state drives, even these systems can have problems. Apple’s built-in utilities and some third-party programs will get you up and running.

Symptoms of a Hard Disk Problem 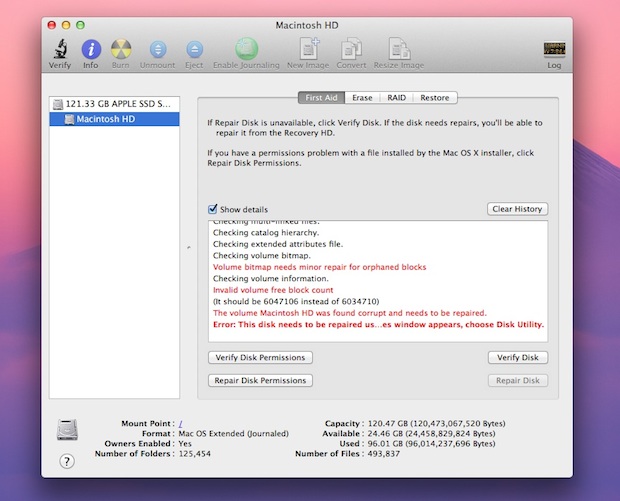 The worst noise you’ll hear from a mechanical hard disk is a clicking or grinding noise. That means the drive is failing. At that point, the drive isn’t repairable. It’s time to back up your data and then replace the drive. You already have a backup though, right?

When you reboot, you’ll see the

Some Macs have a built-in hardware diagnostic. Reboot your Mac holding down the D key. That runs a full hardware test on your Mac. The diagnostic will report any problems, including the hard drive.

Does your Mac Support Apple Diagnostics? Apple explains which models support this here.

You’ll need to boot your Mac off a Disk Warrior flash drive to do testing and repair. The program creates a Recovery flash drive. During its diagnostic process it will repair and optimize the drive. If it detects a hard drive error, the program warns you.

Sometimes it isn’t the Hard Disk

If you’ve tried all this and are still having problems, there could be something wrong with your Mac other than the hard drive. If you have a MacBook Pro, the ribbon cable that connects the hard drive to the rest of the computer can go bad. The Mac exhibits all the same symptoms as a failed hard drive. The best way to figure this out is to remove your hard drive and try it in another Mac. If the hard drive works on another computer, then it isn’t your hard drive.

Check to see if the repair is free: Check your serial number with Apple. Your Mac may still be under warranty.

The other typical problem is operating system errors. A system update or upgrade was interrupted leaving your Mac in a confused state. You can reinstall your operating system from the recovery mode. That won’t erase any data on your Mac.

Rarely the problem is in the Mac’s System Management Controller (SMC) . Before you give up hope, try Apple’s procedure for resetting the SMC.

What if You Have a Solid State Drive?

Solid State Drives (SSDs) don’t make the typical noises of a mechanical hard drive. After all,they have no moving parts. The testing procedures are the same. You won’t be able to easily remove the hard drive to test it in another machine. Programs like Disk Warrior are smart enough to change the optimization procedure for an SSD drive.

Some Macs have easy hard drives to replace. Some Mac models hard drives aren’t replaceable by end users. Most Mac-savvy retailers know the difference and can guide you towards the right repair. Replacing your hard drive with an SSD will give you the best performance, but may limit your storage space. We cover the differences here.

ALSO READ:DaisyDisk: The Best, Most Intuitive App to Find Large Files on Your Mac’s Hard Drive

The above article may contain affiliate links which help support Guiding Tech. However, it does not affect our editorial integrity. The content remains unbiased and authentic.Also See#data recovery 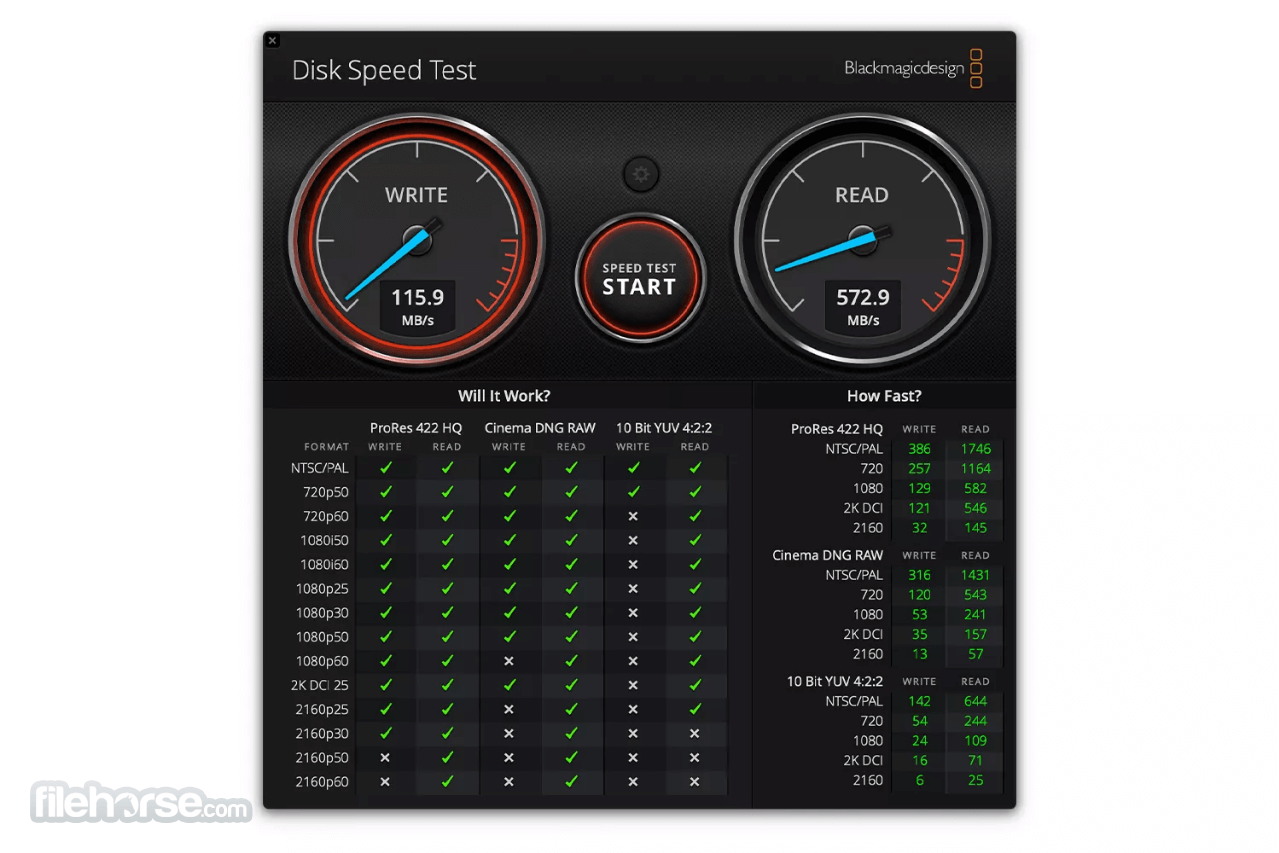 We only check our devices whenever we notice unusual activity or they perform unsatisfactorily. Rarely do we take the time to check our computers and other devices for issues and the problem with checking your computer only when you notice a problem is that sometimes, it’s already too late.

Understand that every computing device, may it be your desktop computer, laptop, or mobile phone, consists of both hardware and software components. And if you are a Mac user, you’re probably under the impression that you have a very secure and reliable machine, think again because while this is true for the most part, a lot of things can still go wrong with your device’s components. All you need to keep in mind is that just because everything seems to be running smoothly, it does not necessarily mean that everything is problem-free.

Before You Begin: An Important Reminder

With this article, we will guide you to performing a Mac hardware test that checks to verify if your Mac’s hardware components are all working correctly, even if it’s not showing any signs of problems but bear in mind that testing your Mac for hardware errors can put stress on your system. It’s imperative that you have one or more backups of your computer so you can recover all of your data if any of it gets lost during the process. We also suggest scanning your Mac through Tweakbit MacRepair first, to reduce junk files and get an extra RAM boost.

Apple Diagnostics is a built-in utility available for Macs introduced in June 2013 and later. This is mainly designed to help determine which specific hardware component may be needing attention. To get started, launch Apple Diagnostics by doing the following:

If your test came back with issues and reference codes, you could cross-reference the codes with the codes on this list. Only by checking the meaning of the codes will you know what to do next. Some will tell you to rerun the test, contact Apple Support, or take your Mac to the nearest Apple Store or Apple Service Provider for assistance.

Furthermore, for devices launched before June 2013, use the Apple Hardware Test instead, which is basically the older version of Apple Diagnostics*. Launching this also follows the same procedures as with launching Apple Diagnostics. But after the language selection, the test will not automatically run. You need to click the Test button.

*Apple Diagnostics and Apple Hardware Test are basic and generic tests. You can also perform other tests that target specific hardware components.

As you use your Mac, you create different types of files and data and save them on the hard drive. While Mac’s hard drive is made sturdy and highly capable of doing its job, it is bound to fail sooner or later due to years of use.

Some of the most common symptoms of hard disk failure are computer slowing down, freezing, strange noise, and corrupted data. But many users tend to ignore these symptoms, especially when restarting the unit usually seems to solve the problem.

Fortunately, you won’t have to wait before your hard disk completely breaks down. Every hard drive uses S.M.A.R.T. or the Self-Monitoring, Analysis, and Reporting Technology. You can check your hard drive’s S.M.A.R.T. status to know if it’s doing fine or already failing. In a previous article, we discussed in detail what S.M.A.R.T. status and how to check for it on a Mac.

By running the standard check on your Mac, you will get two basic results: verified or failing. A verified status means your drive is in excellent condition, while a failing state should be enough to encourage you to back up your computer immediately and most probably, get a replacement. And there’s another way to interpret S.M.A.R.T. data. You can use third-party programs, such as SMART Utility and DriveDx, to look into specific of S.M.A.R.T. data. And while they are installed on your Mac, the apps can give you warnings regarding changes in the hard drive’s health and show you more advanced info about the state of your hard drive.

Checking the Memory or RAM

Now, here’s where it gets tricky. When testing the unit’s RAM, you’d want as little of it in use during the test. However, your computer already uses several GBs of your RAM and when you test your Mac, only the portion not used by the OS will be examined. Better than nothing, though, right? Aside from using Apple or Mac Diagnostics, you can use two other utilities to check your RAM’s status.

Your CPU essentially works in sync with your RAM, so while testing the RAM, the CPU also had a workout. However, some tests specifically target CPUs and processors.

Contrary to common notion, the graphics chip or card doesn’t only work for games. It’s responsible for showing practically everything you see on your Mac. Without the graphics card, you’ll be staring at a blank screen. MacOS relies on the GPU to render visuals, windows, and effects. Your Mac’s GPU works as hard as your CPU, primarily when you usually perform visual-intensive tasks. If you rely a lot on your Mac’s GPU power, it’s best if you’d perform a GPU test to see if yours can keep up with your needs. Here’s how to test a GPU:

The sensors in your Mac are among the most difficult to accurately test at home. While there are utilities that can test the sensors, only Apple really knows the correct value ranges to determine if a sensor passes the test or not. Basically, when you run Apple Diagnostics, and the result didn’t note any problem, it means that your Mac’s sensors are working just fine. But if you want to take a closer look into how your Mac’s sensors are doing, you have some options. The top tool for reading the different sensors on your Mac is TechTool Pro. This test has quite a comprehensive system that includes the testing of temperature, voltage, current, power, and light sensors.

Checking the Physical or External Aspects of Your Mac 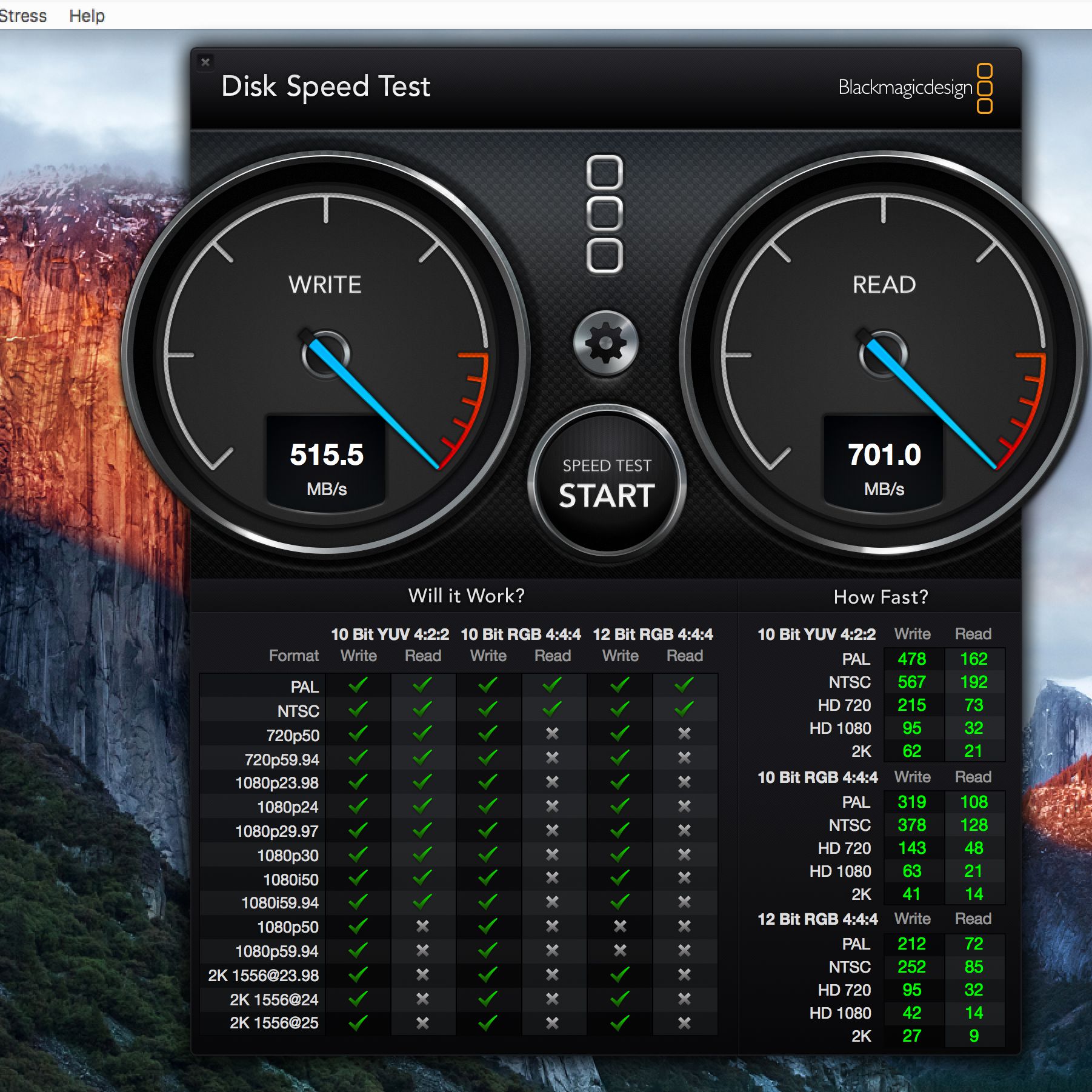 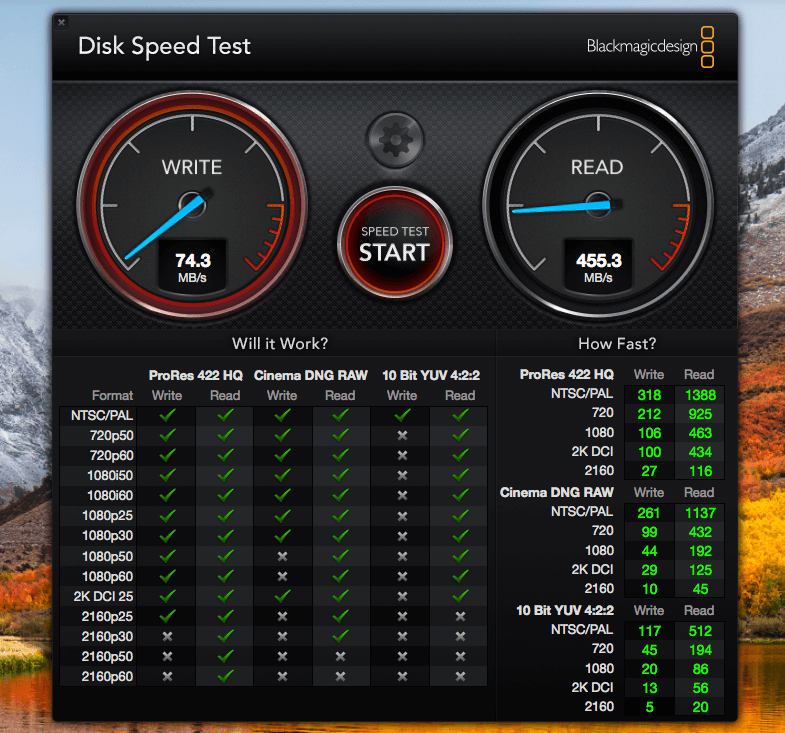 Of course, when we talk about hardware, we don’t talk about what’s inside alone. Hardware also includes the ports, keyboard, and optical drive. Testing these are pretty easy.

To test the ports (USB, FireWire, and headphone jack), just connect the external devices and wires to the ports to verify if they are working fine. For older Macs that still have an optical drive, see if it can read a CD or DVD. Meanwhile, to test the keyboard, just directly open a TextEdit file and test every key in your keyboard. You can also use Mac’s built-in Keyboard Viewer tool. Open System Preferences > Keyboard. Check “Show keyboard and emoji viewers in the menu bar.” The option “Show Keyboard Viewer” should now be available in the menu bar. Click on that, then press the keys on your keyboard. If the keys register with a gray color, then they are working as they should.

There’s no tool that tests Mac’s cooling system explicitly yet, but if you’ve used your Mac to extreme benchmarking and stress testing without it overheating or crashing, then it’s a good indicator that its cooling system is very much capable. Indeed, your Mac is a complex system made up of various components that work well to make sure that the entire system works well.

We hope that this article gave you an idea on how to verify if your Mac’s hardware components are in excellent condition, and help you take care of your computer better.